Every dollar makes a difference in getting the homeless off the streets. Please help us as we strive to get more people into housing! Our founder and president, Michael Oles, is a retired U.S. Air Force Colonel with over 32 years of experience as a volunteer and coordinator working with the homeless. Joe Simons, another member, is the Chairman of the Board and Coordination Director for the Connecticut chapters. Joe retired from IBM with 32 years experience as a volunteer and coordinator working with the homeless. Our remaining board members include, among others: a former CPA; an attorney; a former director of Welfare from the City of Danbury; a local business owner; a volunteer from Dorothy Day Hospitality House and Danbury Hospital; another retired IBM executive and a business owner, both of whom co-volunteer with Brothership in Action; and a Bethel Housing Authority employee. Two of our directors are clergymen.

The life-changing event for Oles happened when he saw a homeless man on a cold winter’s day in one of local Connecticut shelters give up his bed to a homeless woman. “The only possession he had was a bed, and he gave it away. That was a total eye-opener for me,” Oles said. Later, Oles, with another homeless person, spoke to students at a local school about homelessness. The students were inspired to take action, raising money for the homeless person to get off the streets. Oles was struck with their generosity and energy, which eventually pushed him to action. “Students have great idealism, and often as adults we lose that. They pushed me to do more,” he explained.

Soon afterwards, Oles founded the original chapter in Danbury in 2009. There are five other chapters: this chapter (3 years old); another in Lancaster, Pennsylvania (4 years); an affiliated chapter from Huntington Beach, California (separate legal entity and 3 years old); one in the Susquehanna Valley of Pennsylvania (founded in August 2018); and one in Wenatchee Valley, Washington.

OTS Inc. is a non-profit 501 (c) (3) and nondenominational organization. Its primary mission is to fund the security deposits on modest apartments and provide initial living needs for homeless families/individuals.

How does Off The Streets Work?

The mission of Off The Streets is to house the homeless one person at a time. Off The Streets provides security deposits and basic furniture and living needs for those homeless people who have no other means of providing these, but do have a means of paying a monthly rent. OTS’s mode of operations involves:

The model used by OTS is called Housing First and is now accepted as the most effective method of placing homeless people into housing. The Housing First approach is based on the concept that a homeless individual or household’s first and primary need is to obtain stable housing, and that other issues that may affect the household can and should be addressed once housing is obtained.

In our three year history, our greater Bridgeport chapter has placed 145 people into housing. 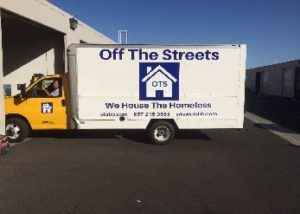 Often, the only thing preventing someone from being housed is the security deposit. As part of its services, OTS generally pays the security deposit directly to the landlord. OTS’ process can usually provide a fully furnished apartment in as little as two to fourteen days. We provide basic household goods (furniture, bedding, etc.) to help give our clients a fresh start.

Getting out of homelessness is a life-changing experience for those directly impacted, as well as is providing them with the self-esteem that comes from renting their own apartment. Reducing the number of homeless people reduces the medical treatment, incarceration, police intervention and emergency shelter expenses for municipalities and taxpayers.

Getting an individual off the streets totally transforms the lives of the people who will no longer be homeless. Once they have a permanent roof over their heads, they can concentrate on getting the rest of their lives in order. It gives hope and inspiration to other homeless people as they struggle to escape from shelters and the streets.

The results of this effort for the greater Bridgeport area:

Except for insurance, storage rentals for furniture and required government filings our overhead is relatively minor. Most funds contributed go directly to support of our mission. We have found that it costs approximately $500 per homeless person in Fairfield County to get Off the Streets.

Here’s a downloadable copy of our information brochure: Off The Streets Brochure (2.2 MB)

Copyright (c) Off The Streets Bridgeport